Announcements advertised are subject to change due to the Coronavirus

PLEASE NOTE Any Announcement advertised or featured on the Calendar are subject to change due to...More

Elders and their duties 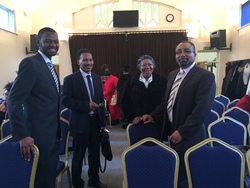 As a world community, we have agreed on a body of doctrine that is non-negotiable. The central beliefs of this church are anchored securely in Scripture and are not open to amendment. They are clearly stated in the 28 Fundamental beliefs and we would ardently resist any effort to tamper with those beliefs outside of a General Conference session when the church may be led by the Holy Spirit to a fuller understanding of Bible truth or finds better language in which to express the teachings of God's Holy Word. In the matter of theology we see no alternative to global uniformity. In order to accomplish our mission in a large and diverse world, there are some things of a non-doctrinal nature which we allow to be done differently from one division to another. Usually these relate to matters that hinge around social customs and in one culture hinder the spread of the gospel message and in another encourage it. These are matters which are not required in scripture but which relate to how the church functions. In our church these are shaped by broad biblical principles and are agreed upon by the body of the church as policies.

It was in this spirit that the church worldwide body agreed in 1984 that individual divisions of the church were free to decide if they wished to allow the ordination of women elders within their area or not.

The division that includes the islands of Britain and Ireland (including Eire) decided that churches within this area could ordain female elders on an equal basis with men. The term elder below should be taken to include both men and women.

Office an Important One—In the work and organization of the church, if a pastor has not been provided by the conference/mission/field, the office of elder ranks as the highest and most important.

A Religious Leader of the Church—The local elder must be one recognized by the church as a strong religious and spiritual leader, and must have a good reputation “with them that are without.” In the absence of a pastor, the elder is the religious leader of the church and by precept and example must continually seek to lead the church into a deeper and fuller Christian experience.

Capable of Ministering the Word—The elder should be capable of conducting services of the church. It is not always possible for the conference/mission/field to supply ministerial help for all the churches; consequently the elder must be prepared to minister in word and doctrine. However, the elder should not be chosen primarily because of social position, or because of speaking ability, but rather because of a consecrated life and leadership ability. This should be taken into consideration by the nominating committee in preparing its report at the time of the church election.

Term of Office—Like all other church officers, the elder is elected for a one- or two-year term as determined by the local church. It is not advisable for one person to serve indefinitely, but the elder may be re-elected. The church is under no obligation, however, to re-elect, but may choose another for eldership whenever a change seems advisable. Upon the election of a new elder, the former elder no longer functions as elder, but may be elected to any other church office.

Ordination of Local Elder—Election to the office of elder does not in itself qualify one as an elder. Ordination is required before an elder has authority to function in that office. During the interim between election and ordination, the elected elder may function as church leader but not administer the ordinances of the church.

The sacred rite of ordination should be simply performed in the presence of the church and may include a brief outline of the office of elder, the qualities required, and the principal duties the elder will be authorized to perform for the church. After the exhortation, the minister, assisted by other ordained ministers and/or local ordained elders who are participating in the service, will ordain the elder by prayer and the laying on of hands. For one having once been ordained as a church elder, ordination is not required again upon re-election to office as an elder, or upon election as elder of another church, provided that regular standing in the church has been maintained. One who has been ordained as elder is thereby qualified to serve subsequently in the deaconate office.

Training and Equipping of Local Elders—The Ministerial Association, in cooperation with the departments, promotes the training and equipping of local church elders. However, the pastor has the primary responsibility for training the local elder.

To Foster All Lines of Church Work—Under the pastor and in the absence of a pastor, the local elder is a spiritual leader of the church and is responsible for fostering all departments and activities of the work. The elder should maintain a mutually helpful relationship with all other church officers.

Relationship to the Ordained Minister—In a case where the conference/mission/field committee assigns an ordained minister to labour as a pastor of a church, he should be considered as the ranking officer, and the local elder(s) as his assistant(s). Their work is closely related; they should therefore work together harmoniously. The minister should not gather to himself all lines of responsibility, but should share these with the local elder(s) and other officers. The minister serving the church regularly as pastor acts as the chairman of the church board. There may be circumstances, however, when it would be advisable for the elder to act in this capacity. The pastoral work of the church should be shared by both. The elder(s) should, in counsel with the minister, assist in the pastoral responsibility, which includes visiting the church members, ministering to the sick, arranging or leading out in anointing services and child dedications, and encouraging those who are disheartened. Too much emphasis cannot be placed on this part of an elder’s work, who as an undershepherd should exercise a constant vigilance over the flock. If the appointed pastor is a licensed minister, the local church or churches that he serves should elect him as an elder so he is able to conduct communion services etc. in the local churches

Conduct of Church Services—Under the pastor, or in the absence of a pastor, the elder is responsible for the services of the church and must either conduct them or arrange for someone to do so. The communion services must always be conducted by an ordained minister or by an elder. Only ordained ministers or ordained elders currently holding the office of elder in that local church (or authorised as a district elder) are qualified to do this. The pastor usually serves as chairperson of the business meeting, and in his absence the elder shall officiate as chairperson.

Baptismal Service—In the absence of an ordained minister, the elder shall request the president of the conference/mission/field to arrange for the administration of the rite of baptism to those desiring to unite with the church. A local church elder should not officiate in the baptismal service without first obtaining permission from the conference/mission/field president.

Marriage Ceremony—In the marriage ceremony the charge, vows, and declaration of marriage are given only by an ordained minister except in those areas where division committees have taken action to approve that selected licensed or commissioned ministers who have been ordained as local elders may perform the marriage ceremony. Either an ordained minister, licensed or commissioned minister, or a local elder may officiate in delivering the sermonette, offering the prayer, or in giving the blessing.

To Cooperate With the Conference/Mission/Field—The pastor, elder(s), and all church officers should cooperate with the conference/mission/field officers and departmental directors in carrying out local, union, division, and General Conference plans. They should inform the church of all regular and special offerings, and should promote all the programs and activities of the church.

The elder should regard all correspondence from the conference/ mission/field office as important. Letters calling for announcements to the church should be presented at the proper time.

The first elder, in the absence of and in cooperation with the pastor, should see that delegates to conference/mission/field sessions are elected and that the names of such delegates are sent to the conference/ mission/field office by the clerk.

The elder should give counsel and help to officers in the church to measure up to their responsibilities in cooperating with the conference/ mission/field in carrying out plans and policies, and in seeing that reports are accurately and promptly forwarded.

To Foster Worldwide Work—Another important feature of the elder’s work is to foster world mission work. This should be done by making a careful study of the worldwide work and presenting its needs to the church. The elder should encourage members to take a personal part in both supporting and working for the cause of missions. A kindly, tactful attitude on the part of the elder will do much to encourage liberality on the part of the church members both in the regular church services and in the Sabbath School.

To Foster Tithing—As one who faithfully returns tithe, the elder can do much to encourage the church members to return a faithful tithe. Anyone who fails to set an example in this important matter should not be elected to the position of elder or to any other church office. Tithing can be fostered by public presentation of the scriptural privilege and responsibility of stewardship and by personal labour with the members. Such labour should be carried on in a tactful and helpful manner. The elder should regard all financial matters pertaining to church members as confidential and should not place such information in the hands of unauthorized persons.

To Distribute Responsibility—In the distribution of duties pertaining to church activities, care should be taken not to lay too much responsibility upon willing workers, while others with perhaps lesser talents are passed by. The election of one individual to several offices is to be discouraged unless circumstances make it necessary. The elder especially should be left free from other burdens to perform effectually the many duties of this sacred office. It may be advisable in some cases to ask the elder to lead the outreach (missionary) work of the church, but even this should be avoided if other talent is available.

First Elder—In churches with a large membership it is advisable to choose more than one elder. The burdens of office may be too great for one person, and should be shared by as many as are required to do the work. In such event one of them should be designated as “first elder.” The work should be divided among the elders in harmony with their experience and ability.

Elder Not a Delegate Ex Officio—In order to serve as a delegate to the conference/mission/field session, the elder must be elected as a delegate by the church. An elder is not a delegate ex officio.